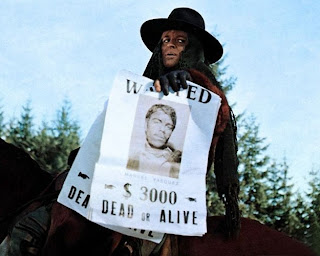 There was a time when you couldn't keep me from the theater when a new QT opened, but I've yet to see INGLORIOUS BASTARDS (or however he spells it) and despite largely positive feedback from folks I trust, I'm pretty sure I can wait till DJANGO hits Redbox before I even consider it.

But at least when Tarantino apes a genre it ends up generating articles like 'The Top 20 Spaghetti Westerns' which I read this morning.

Any longtime ER reader knows that Spags aren't really my thing. I find them overly long, cliched, dull and repetitive, but as a Klaus Kinski Kompletist I've had to watch more than my fair share.

That said, I was glad to see four Kinski flicks make the list (FOR A FEW DOLLARS MORE, the underrated THE RUTHLESS FOUR, the overrated A BULLET FOR THE GENERAL and Sergio Corbucci's brilliant THE GREAT SILENCE, which clocks in at a well-deserved #2).

Frankly, I feel like the list is complete without at least one Sartana flick (even if I have yet to see one that's all that spectacular) and I'd have thrown the unique 3-D Spaghetti Western COMIN' AT YA! on there, especially after seeing the restored version earlier this year at ActionFest. I bet ER contributor John Grace would argue that some Tony Anthony flicks belong on there and for my money the overlooked Spaghetti giallo THE PRICE OF DEATH also belongs on any such list, as does the gory CUTTHROATS NINE.

But hey, at least they didn't include KEOMA.

What Spaghetti Westerns do you think got snubbed? Answer in the comments section below.

They missed "Day of anger", "and God said to Cain", "Cemetery without crosses", "Bandidos" and a couple more.

Definitely some missed titles on the list! Thanks for the feedback.